skip to main | skip to sidebar

Can a good time be had in Las Vegas with kids?

We were looking to go on a fun and inexpensive mini vacation this summer.  We thought long and hard and decided we should go to Las Vegas.  We mostly got the same expression when we told our friends our plan-the initial wide eyes followed by a smug smirk as they thought "good luck with that"!  Nevertheless, off we went to try our luck at having a fun time in Vegas with the kids.

We received numerous recommendations from friends and family on what we should do and see while on vacation.  One of the recommendations was off the beaten path in Barstow, CA.  We were told it is an absolute MUST to stop at the Del Taco in Barstow when headed to Vegas.  Neither Papa Z nor I are big Del Taco fans, but we had to see what all the fuss was about.  As it turned out, it is the original Del Taco.  The building looks to be the original building from the 1960s and the bathrooms are outside, but I must admit the food tasted better than most Mexican fast food places. 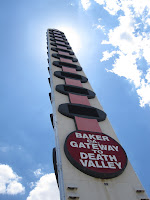 The next stop was the World's largest thermometer in Baker, CA.  We got the kids excited about it and unfortunately it must have been too hot to work because it had random numbers everywhere.  Thinking back on it now, if I added all the numbers together it would equal 999 degrees which I believe was fairly close to the correct temperature-give or take a few degrees! 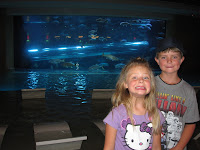 After the State line dance, 500 rounds of eye-spy, and much anticipation we finally made it to Las Vegas.  Our first night we stayed at the Golden Nugget in Old Las Vegas.  The lure of staying there was the pool.  In the center of the pool was a huge shark tank!  It also had a 3 story water slide that cut right through the tank!  I was surprised Wacky Zacky was brave enough to go on the water slide, but if truth be told I think I was more scared of it than him! 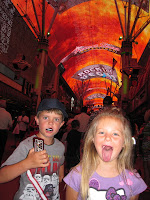 After a few hours of close encounters with sharks we headed out to Fremont street.  It is a covered street that every so often plays a light show on the roof.  They also had a few 80's bands performing.  I'm not sure what happened, but all of a sudden Zany Janie turned into "that girl".  That girl that seems to be the drunkest one around despite being 5-years-old.  That girl that is dancing crazy and laughing uncontrollably.  Between her giggling and dancing she was able to shout, "I never want to leave Las Vegas!"  She is certainly our wild child! 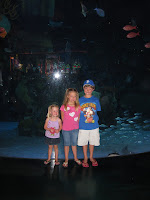 After a horrible night of sleep due to Silly Jilly deciding to stay up until well after Midnight, we started our day back at the pool.  Next we went to the Silverton Hotel where they have a huge aquarium with sting rays.  The kids sat for at least 30 minutes mesmerized watching the fish swim around the aquarium.  The kids also enjoyed watching a scuba diver feed the fish.  Despite being pressed for time, we decided to wait around for the Mermaid show.  After watching a woman dressed as a mermaid blow kisses and wave at the kids through the aquarium glass it quickly became clear that this was the show﻿ so we abruptly left. 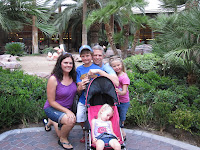 Next we ventured to the Flamingo Hotel to see the Wildlife habitat.  The kids seemed to enjoy it.  As you can see Silly Jilly (toddler in the stroller) enjoyed it the most! 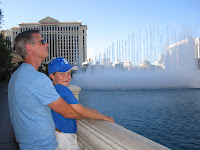 No trip to Las Vegas is complete without a viewing of the Bellagio Water show.  It is absolutely mesmerizing.  Two minutes into the show Zany Janie came to a realization and proudly pointed out, "Look the sprinklers are dancing to the music!"  The whole family enjoyed it so much that we watched it twice. 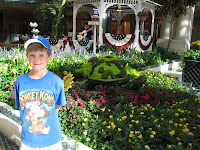 While waiting for the next water show we strolled around the breathtaking Bellagio Gardens.  I can't reveal how we know, but just word to the wise-Don't touch anything! 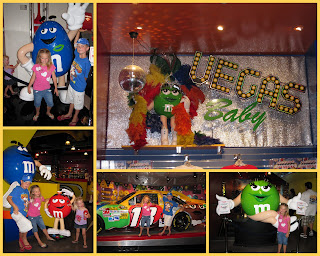 The next stop was M&M World where they have any M&M themed item you could ever want!  We watched a free 3D movie that was entertaining enough.  I have no idea how we did it, but we got out of there without any of our kids grabbing  and eating a handful of M&Ms! 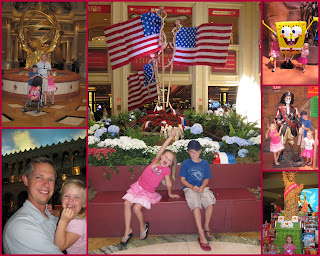 Other fun points of interest included seeing the statue of liberty made out of Jelly Bellys, playing games and going on rides at the Adventuredome, going to the circus show at Circus Circus, walking around the Venetian, and seeing the Gondolas.  A few things we did learn:  The MGM no longer has a Lion Habitat and the Excalibur did away with their free show about seven years ago.  Both of those things would have been good to know before hand so we didn't have to walk those extra 10 miles in the 100 degree heat!  We did enjoy a few breakfast buffets.  I'm not sure if it is just a coincident or if the kids were deliberately trying to push our buttons, but they always seemed to ask, "Can I have a snack?" not five minutes after exiting a buffet! 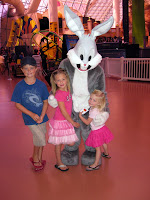 We also found you could take your picture with about any character imaginable along the strip:  Hello Kitty-check; Star Wars characters-check; Superheroes-check; Sponge Bob and friends-check; a scantily clad dressed devil with a scary hairy angel man in a thong sidekick-check...The list was endless.  What we did notice was the characters frequently took the heads off of their costumes-which who's to blame them it was over 100 degrees blazing heat.  The problem is I'm not sure which was scarier-the kids seeing a headless character or seeing the face of the person in the costume.  I'm not a gambling Mama, but if I were I would have to say the odds were 100:1 that each and every one of them was a tweaker! 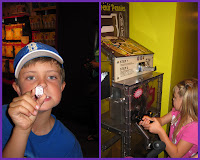 Next to winning stuffed animals, the biggest thrill for the kids was getting souvenir pennies.  If you know about them you know what a deal they are-wink wink!  If you don't know, it's a machine where you put in 51 cents and it "presses an image onto the penny".  If we had allowed it the kids would have spent our life savings on obtaining those special treasures.

We did actually do some gambling.  During a couple of our meals we played Keno.  Since we didn't win the $25,000 prize I can admit we let the kids pick the numbers.  They got into it a little more than I thought they would and sat with anticipation as each number popped onto the screen.  Lady luck was on our side and we did win the first round, but Vegas got the best of us and we got sucked back in and lost our money!

Overall, Las Vegas was the fun and fairly inexpensive family trip we were hoping for. I don't think we even covered half of the free things available. By using the coupons our hotels gave us we were able to get free rides and free games at Adventuredome and some discounts on food/buffets. 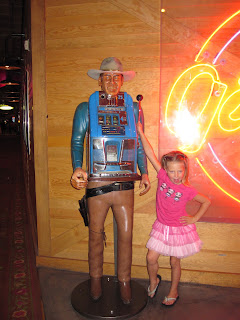 Since being home all three kids have asked about going back to Vegas.  I think they loved it-some maybe more than others.  I think we need to keep an eye on Zany Janie!

I always knew that Mid was going to be a wild child :)

Mama Z
I am a SAHM of three silly zany kids. They keep me busy and on the brink of insanity. I am trying to find a balance between kids, husband, self, housework, scrapbooking, sewing, and selling things on etsy. I love being with family, having fun, the outdoors, and being creative.

Take a peek at my zany creations

Promote Your Page Too

Take a peek inside my online Baby Boutique